There’s still much to im­prove for sea­farers

A study led by HNU’s PhD student Marina Fotteler examines the working and living conditions of seafarers, which were to be improved worldwide when the Maritime Labour Convention (2006) of the International Labour Organisation entered into force. However, there is still room for improvement.

Within the scope of an analysis of global shipping, HNU’s PhD student Marina Fotteler (DigiHealth Institute) and scientists from the University of Southern Denmark (Syddansk Universitet) evaluate the effects of the Maritime Labour Convention (2006) of the International Labour Organisation (opens in a new window), which came into force in 2013 and has now been ratified by 93 states. The Convention is considered a milestone in improving the situation of seafarers and sets minimum standards in areas such as employment contracts, wages, working hours, rest periods, accommodation, food, and medical care. One of the mechanisms employed to enforce compliance is port state control, which is organised and carried out in different shipping regions of the world (the so-called "Memoranda of Understanding" or MoU regions).

All MoU regions publish annual inspection statistics, which have been systematically evaluated by the authors for the period 2010 to 2017 - i.e., the periods of time before and after the establishment of the Maritime Labour Convention. However, the analysis shows only slight changes in the number of ship inspections, with a coeval slight decrease in detected deficiencies of different categories in almost all MoU regions. "Well, there is certainly room for improvement, also in Europe, because the percentage of documented deficiencies remains quite high. It would of course be better if, despite all those inspections, significantly fewer deficiencies were discovered over time. Only then we could speak of real improvements", Marina Fotteler comments on the current development in shipping. Nevertheless, the trend at least shows an increased awareness for seafarers and their working and living conditions. "Around ninety percent of all goods worldwide depend on shipping at some point in the process, and yet this entire industry is completely invisible to most of us", says the lead author of the study, which was published in the international journal BioMed Central Public Health (opens in a new window).

Research Associate for Digitalisation in the Health Sector

To profile of Marina Fotteler 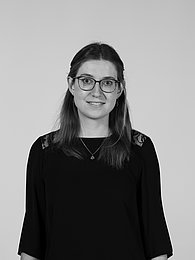